Over the Easter weekend, seven Brighton College pupils travelled to Calais to volunteer with the refugee charity L’Auberge des Migrants. Over two days, they sorted crates of donations in the warehouse, helped cook dinner for 1,000 refugees in the Community Kitchen and cut firewood in preparation for winter. Alongside this support, the group also took urgently needed supplies such as toiletries, clothing and camping supplies with them, many kindly donated by the BC community. As a group they doubled the warehouse’s clothes repair operation, sorted through hundreds of backlogged items of clothing ready for distribution and took part in a much-needed deep clean of the kitchen.

We spoke to Mason, an Upper Sixth pupil who played a lead role in coordinating the trip:

“Speaking to the warehouse managers and coordinators, they all stressed how grateful they were for our help and the impact that we had on the warehouse, further underscoring the large impact a small group can have on causes like these. We were struck by how friendly the volunteers were, as well as how much there was to do.

We left the warehouse each day only having made a tiny dent in the mountain of unsorted supplies, but knowing that we’d put hundreds of items of clothing one step closer to being in the hands of refugees living on the streets.” 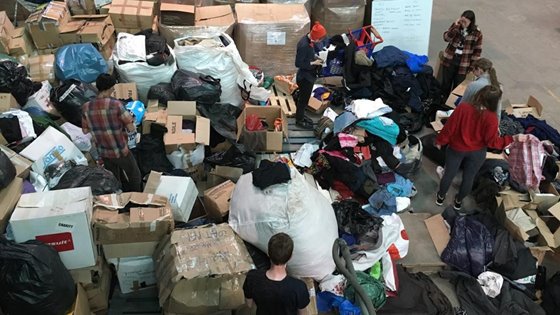 Before the group set off they began fundraising, setting up a JustGiving page to help source funds to support the trip. The group would like to thank everyone who donated, helping them raise a total of £325.

We asked the other members of the group for their thoughts on the experience:

Annabelle: “The warehouse of Help Refugees was very well organised, considering it was manned by only volunteers. Dust, colours and music blared from every corner, adding to the vibrant and friendly vibe of the campsite. We helped sort supplies by putting them in specific categories: for example, differentiating between summer and winter blankets. Working with friends for a meaningful cause was a highlight in itself.”

Rosie: “I spent the majority of the weekend in Sew-Ho where we were tasked with fixing broken zippers and seams and sewing up holes in jackets and sleeping bags. Many of the donations the charity get are ideal for the conditions that the refugees are facing. However, they might be unusable because they have a hole in the pocket or a stuck zipper. Our task was to help maintain the dignity of the refugees by making sure the donations they received were of the same quality as the clothes we wore ourselves.”

We'd like to pass on our thanks and admiration to these pupils. As a College we are incredibly proud of your efforts.